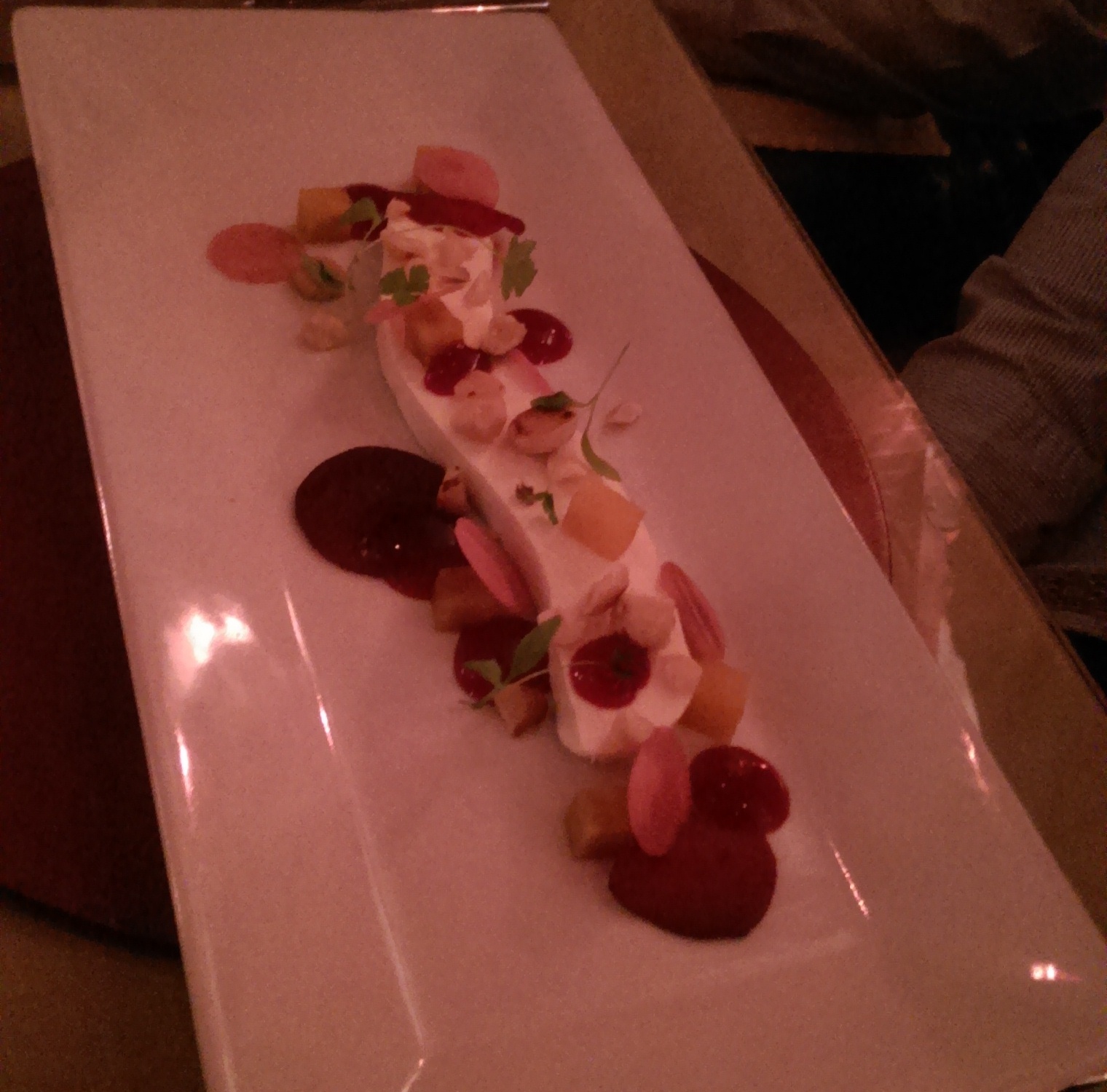 I’m still recovering from my meal at Rafters. It took place on Christmas Eve and completely overshadowed (for me) the Christmas dinner I produced the next day. Put simply, it was divine. Obviously, I will elaborate below, but if you can’t be bothered to read the rest of this post, know this: Rafters is awesome and you should find a reason and the time to go. Make it a New Year’s resolution if it helps.

Before I go on, I have to make it clear- Christmas Eve isn’t just Christmas Eve in our house. Rather more importantly, it is also the birthday of one of our besties. Last year, we were in the pub celebrating with our pals until late into the night and rolled home very merry with not a care in the world, as we were spending Christmas à deux.

This year, we again stumbled home quite squiffy but with both Dads (my own and my Pa-in-law) awaiting our return; I reverted to my teenage self and tried desperately to act sober, thinking at the time I was getting away with it but realising over our smoked salmon brunch the next day that the Dads had seen straight through my act. I didn’t care though; I’d had a fantastic night out with my best friends, eating the finest restaurant food I’ve yet to have in Sheffield in a great setting.

We started off with some drinks and Christmas tree admiration at birthday boy’s house, before hopping in a few cabs (there were eight of us) to Rafters. We’d an 8:30pm booking, which meant two things. Firstly, that there was time for our pre-dinner prosecco without needing to rush around. Secondly, that the restaurant had started to run low on some things- but this didn’t affect our experience too much.

Upon arrival at Rafters, which looks tiny from the outside but is slightly larger inside, we headed upstairs and got settled at our table. The dining room is fairly small, with soft lighting and a warm, cosy feel. All of this adds up to make the place feel special and intimate. It was fully booked with a mixed clientele of couples, families (some with three generations) and friends. There was a bit of tasteful Christmas décor to get us in the mood, if the prosecco hadn’t.

We started with canapés of a little celeriac soup, served with a gougère (cheese choux bite). The soup was wintery and warming, with a good balance of seasoning. It felt like a comforting hug. The gougère was crisp and light.

Then a basket of homemade bread was brought round. We could choose between flavours including pesto, black pudding or cheese. I gave birthday boy half of my pesto bread and had half of his black pudding bread. Both were delicious, with lots of flavour packed in. And they looked so pretty, too.

For my starter, I’d chosen the king scallops, black pudding and pea purée. There were only four portions of these left when we ordered, as we were helpfully advised by our waiter, so I was pleased to negotiate one of them. The scallops were massive and tasted super-fresh. The black pudding had been shaped into little nuggets, then breaded and fried; they were heavenly.

Others on the table had the crispy belly pork, the chicken, ham hock & baby leek terrine or the goats cheese panna cotta. Feedback on all of these was very good. Check out the pork belly and the goats cheese:

After the sublime starters, there was a quick raspberry sorbet palate cleanser. I’ve never thought much to palate cleansers, personally, but it was tasty and refreshing, so I guess it did its job.

Already starting to lose count of the courses, our mains arrived. I’d plumped for the loin of Derbyshire lamb, served with creamed Savoy cabbage and garlic purée. Rafters have very wisely chosen Moss Valley Fine Meats as their meat supplier. The lamb was cooked to perfection, served pink, and the portion was very generous. My only wish was for a tiny bit of something carb-y with this (there’s no option to order sides on the menu), but it was still a really good choice.

My neighbours’ mains of the fillet of beef and the Yorkshire brie and leek tart got top reviews. The beef looked mouthwateringly good:

Desserts were also starting to run low, with negotiations taking place on our table for the three remaining portions of flavours of Valrhona chocolate. I lost this round and had to choose an alternative. I’m glad I did, because my bread and butter pudding was delicious. Sometimes this can be a bland, stodgy mess, but Rafters’ take on it was lush, and the portion size was spot on.

The flavours of Valrhona chocolate looked pretty but actually didn’t live up to expectations for some- I tried a bit of one and thought it was good, though (but it’d take a real disaster for me to not enjoy a chocolate dessert):

Birthday boy was brought a very special Bakewell tart, featuring candles and a massive sparkler. It was all rather exciting and looked pretty tasty:

Dining at Rafters was £37.95 a head when we were there, but their menu’s just changed and it’s now £39pp. Factoring in my share of a couple of bottles of wine and a tip, it was £58 each. A bit of a treat but well worth it, for the quality and inventiveness of the food, the service, ambience and whole experience. £39 each is really good value for money and the menu changes frequently to adjust to the seasons and show off what the kitchen can do.

Rafters has been a fixture in Sheffield since 1994 and recently changed hands, with Marcus Lane (the chef/owner from 2001-2013) having handed over to the new management team of chef Tom Lawson and front-of-house manager Alistair Myers. Tom and Alistair were formerly at the Devonshire Arms in Middle Handley together. It’s amazing to think that Tom’s only in his early 20s and is achieving such great things in the kitchen (he was named one of the Young Chefs of the Year in the 2012 Eat Sheffield awards).

Sometimes when a great place changes ownership, it can head downhill. Now, this was my first Rafters experience so I’m not comparing it to what went before, but based on our night there it seems to have been a fairly smooth transition. I loved it.

It was great to end my Sheffield dining experiences for 2013 on such a high. I look forward to returning to Rafters in 2014 and beyond to see what other brilliance Tom and Alistair produce. It’s definitely going to become a go-to for special occasions for us (hint, hint, first wedding anniversary) or for taking out-of-towners to.

Rafters can be found at 220 Oakbrook Road, S11. You can check them out on Twitter @rafterss11 or on their website.

🤍🤍 Big love, Steel City 🤍🤍
Well. I wish I'd done that sooner. A very long overdue visit to @_butta_la_pasta on London Rd last night absolutely knocked my socks off.
Name a dessert you could eat every time and never get bored? I'll go first: crème brûlée.
OMG a weekend day without rain! 😱 We actually sat outside at @harley_cafe to enjoy our lunch today in the mild November weather.
ad // Last weekend I rounded up a couple of my oldest friends and we headed over to @silversmiths_restaurant for a long-overdue catch up (thanks, panny d!) while we checked out the bottomless brunch menu.
Adulting has been a LOT this week. Had to be pancakes for tea 👌 anyone else love a little breakfast for dinner action (brinner)?
Loading Comments...
%d bloggers like this: