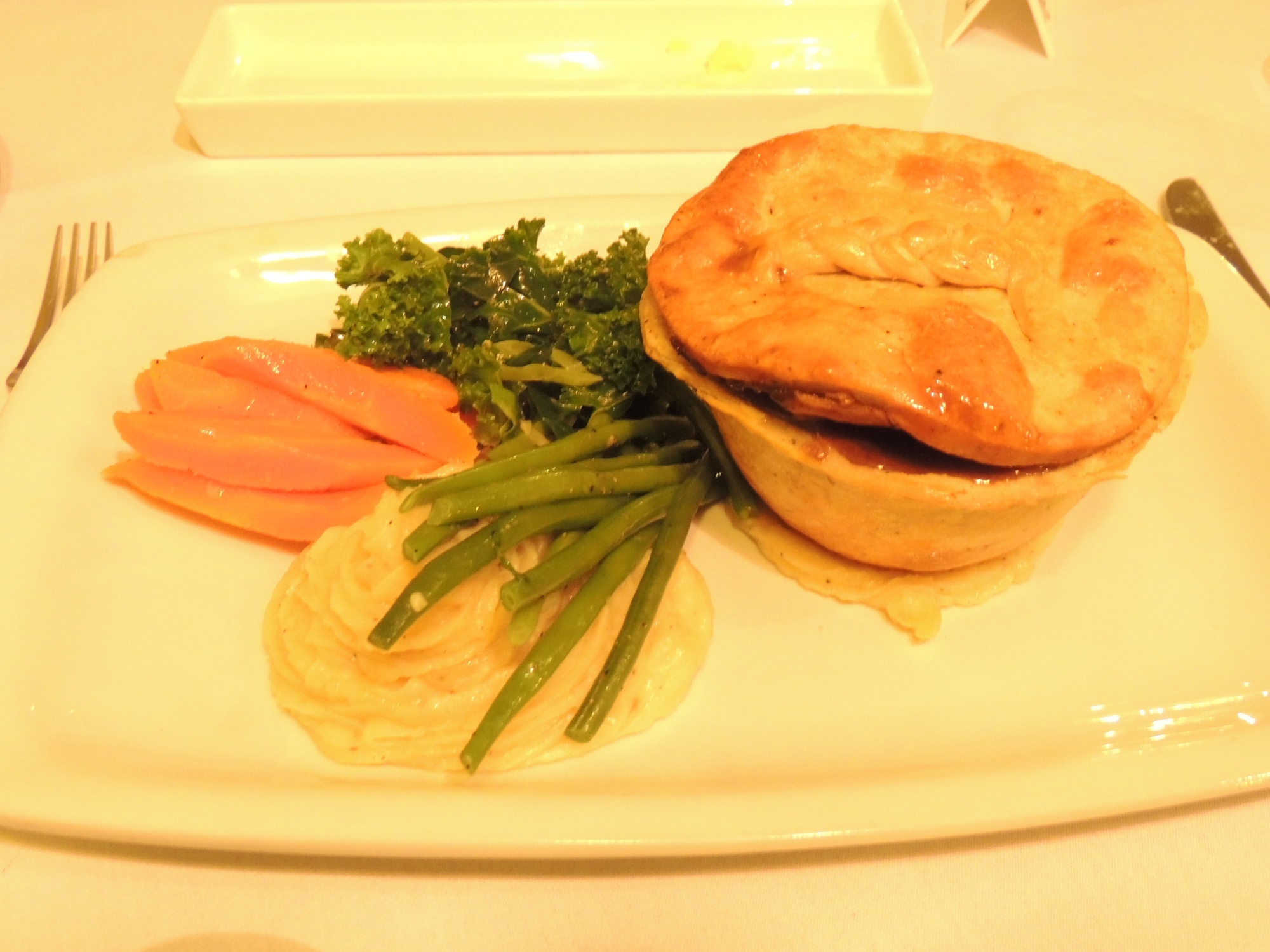 There’s a new entry on my list of favourite spots for good pub food. And it caught me unawares.

When an email landed in my inbox inviting me to come check out The Talbot, a local pub that’s recently undergone a big change of culinary direction, I was intrigued. It’s not a pub I’d been to before, or really heard of, so I had a nosy about online to find out more.

And, well, here’s what I found in my research: while some people were positively embracing the new menu and approach with open arms/mouths, others were up in arms at the loss of The Talbot’s previous menu.

Said previous menu featured 2 courses for 2 people for £10; there used to also be 2 for £6 and 2 for £8 options. This sounds like my worst nightmare. To me, abandoning the cheap menu in favour of a greater focus on quality produce and freshly-prepared options must surely be a good move- and it certainly came across this way on the night.

That’s not to say the food isn’t still affordable at The Talbot. None of the starters costs more than £5, and the mains range from £5.95 for dishes like sausage and mash, fish and chips or liver and onions to £17.95 for a fillet steak. For £16.95, you can get an epic-sounding mixed grill, featuring 6 different meaty options, assorted carbs and almost guaranteed meat sweats. All very fair prices.

The Talbot have moved to focus on, in their words, serving “the best food we possibly can for the best possible price, continuing in The Talbot tradition of providing good value for money. On the same hand we want to serve you fresh home cooked food”. I gather that in the olden days, there was a lot of deep frying and some microwave action, too.

Nowadays, they receive daily deliveries of fresh food, from local suppliers as much as possible- meat from Derbyshire, spuds from Eckington, other veg and fruit delivered from Sheffield- and create delicious, fresh food made with care and passion.

Once we’d ordered our food, we were brought some warm bread and butter. The mini loaves are baked in-house and were a nice touch:

Speaking of nice touches, the proper table linen and the waiting staff being dressed professionally were appreciated by us.

We decided to kick off with the ham hock terrine and the oak-smoked salmon fishcake, and I got to try some of  both starters.

If you’ve read about my Regather supperclub experience, you’ll already know of my penchant for a porky terrine. And The Talbot’s terrine was terrific. The Talbot served it with bread which had been fried to create toast; they added seasoning to the bread while cooking it and this made it really tasty:

As you can see, the terrine was really meaty and broke apart easily as I smooshed it onto my toast. There was a good ratio of toast:ham hock, which is always pleasing; nothing worse than being left with excess bread once the meat’s all gone (though, in this instance, the toast was so tasty with the salt and pepper on it that I would have eaten it on its own).

The fishcake starter was a very generous portion. There was a good amount of fish in each cake, which had been left chunky enough that you could still tell it was salmon. The chilli mayo was an excellent complement to the fish:

By the end of the starters, we were already saying we wanted to come again and again to The Talbot, and that it should be added to the rotation of places we take our weekend visitors to eat.

The mains arrived and I was pleased that The Talbot served them on proper plates- I’m alright with slates for starters, if they work (and they did), but I like the security of an edge/lip to my plate for a main.

My surf and turf was a wonder to behold:

The “surf” element was a considerable portion of scampi. I requested mustard and was pleased to be offered a choice between English or French (French, always, with steak). The steak itself had been grilled medium, as per my specification, and was nice and tender.

Those onion rings had a good bite to them, with the batter light and crispy and the onion not greasy nor slimy. The chips were amazing. In Montréal (my childhood hometown), there’s a small chain of restaurants called Lafleur, whose fries are legendary in my family; The Talbot’s chips came very close to being cooked like Lafleur’s, which isn’t an accolade I throw around lightly, nor often.

My other half had the steak and ale pie which, to everyone’s relief, wasn’t just “a casserole with a lid” (a real bugbear) but in fact a proper pie:

The pie was absolutely packed with loads of tender chunks of beef, in plenty of tasty, rich gravy:

Our only criticism of the pie is that the pastry lid was a bit too thick and hard in some places. Glyn, who manages The Talbot, knew this though and told us that they’re working on it. It’s to do with it being a proper pie rather than just a top-only pie, and the fact that they have to make the pies in advance so that punters aren’t sat waiting for 45-plus minutes if they order one. I’m sure they’ll have perfected it by our next visit.

Still, the pie was brilliant and packed with flavour, as were the accompaniments- creamy and buttery mashed potato and vegetables that still had some crunch.

Although we were clearly far too full to do anything but go home and lie out while contentedly rubbing our tummies, Glyn twisted our arms and- whaddya know?- desserts were in front of us before we knew it.

The white chocolate crème brûlée was rich and smooth. Under the satisfying thick caramel layer- which was a delight to crack through for the first time- there were some raspberries hiding in there! They still count as one of my five-a-day, even concealed in a calorific, creamy dessert, right?:

The Bailey’s chocolate mousse was quite dense and, again, very rich. I wasn’t in love with the presentation of it, in a wine glass, but it really wasn’t in there for long:

My inner monologue about two minutes after the above picture was taken went something like this:

Me: Because it’s so damn tasty, Sara!

The Talbot (sometimes referred to as The Talbot Arms) is located on Stubley Lane in Dronfield and is just 8 minutes’ drive from my home in S8. There’s plenty of free parking at the pub. The #43 bus from Sheffield also passes right by the pub with a stop outside, which I’ll remember next time so I can enjoy some of their boozy offerings. I also look forward to trying the hunter’s chicken and the gammon & egg, both of which Glyn speaks very highly of.

Outside, there’s a big garden area with seating; apparently the front garden gets the sun all day. There’s also a fun-looking climbing frame. For kids, obvs, not for me. Dogs are welcome at The Talbot, too, in the bar side of the pub (we dined in the restaurant side), where there are screens showing live sport, as well as pool tables. This is in a separate room altogether, so you needn’t worry about being disturbed by sports fans’ cheers as you dine.

I was genuinely impressed by the food and service at The Talbot and think the change in menu and style is a smart move. The focus on quality, local ingredients ticks my boxes, and it’s good value for what you get. Thanks again to Glyn and his team for a great night; we’ll definitely be back.

There’s a Virginia Woolf quote on the wall at The Talbot, which reads: “One cannot think well, love well, sleep well, if one has not dined well”. One slept very well indeed that night.

What's your favourite element of a roast dinner? Mine is the spuds (so long as they're good!). I think. Unless there's also broccoli/cauli cheese... And then it's very hard to choose! 🤔
ad | Looking for brunch plans this weekend? Highly recommend you check out the brand new all-day brunch menu at @saw.grinders.union. We popped down last Sunday and thought it was fantastic, with something for everyone: plenty of sweet or savoury options, and not *just* all about the poached eggs! (Though they do have some great-looking eggs Benny on offer)
🙋🏻‍♀️ morning! Still here. Just busy beyond belief IRL, all over the show and so, so tired.
Still recovering from these *amazing* spiced roasted sweet potatoes with honey whipped goats cheese. Lovingly cooked by my wife using a recipe by @starinfinitefood.
ad | Thanks @toogoodtogo.uk for having me check out your trial partnership with some @aldiuk supermarkets in Sheffield. I got all of this in my magic bag for just £3.30 and saved it from going to waste!
When you drop someone off at Chesterfield train station and there's a @cawacoffee *right there*... Well, it would have been rude to leave without a cinnamon bun, wouldn't it? 🤷‍♀️
Loading Comments...
%d bloggers like this: