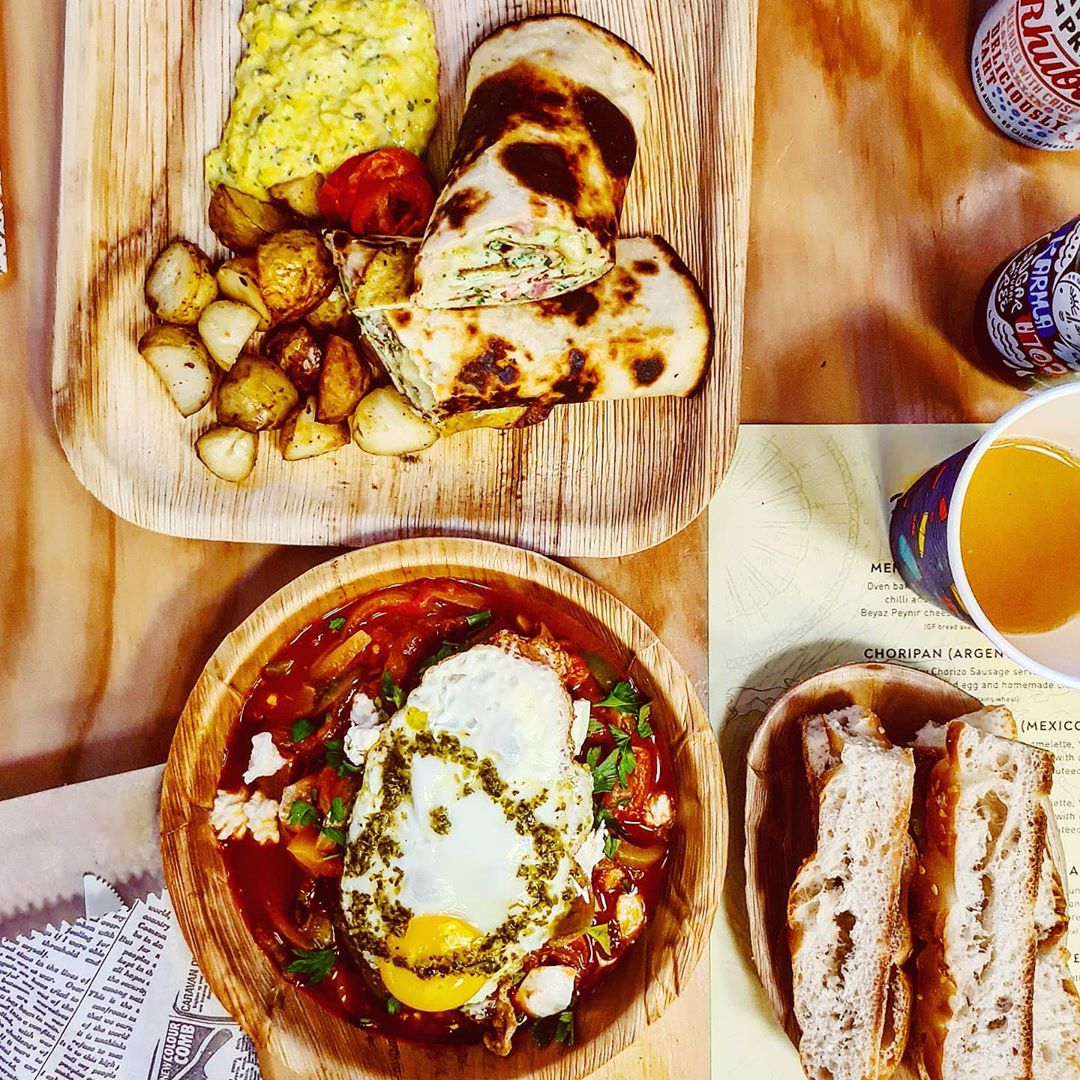 We went out to eat yesterday for the first time since March. It felt absolutely momentous and so we were delighted that the food more than lived up to the occasion.

We were at the first installment of The Breakfast Club, a new pop-up breakfast and brunch session at The Hide warehouse space on Scotland Street. Food was expertly prepared by Percy & Lily’s in their awesome vintage Citroën H van and drinks by Smith St Coffee. 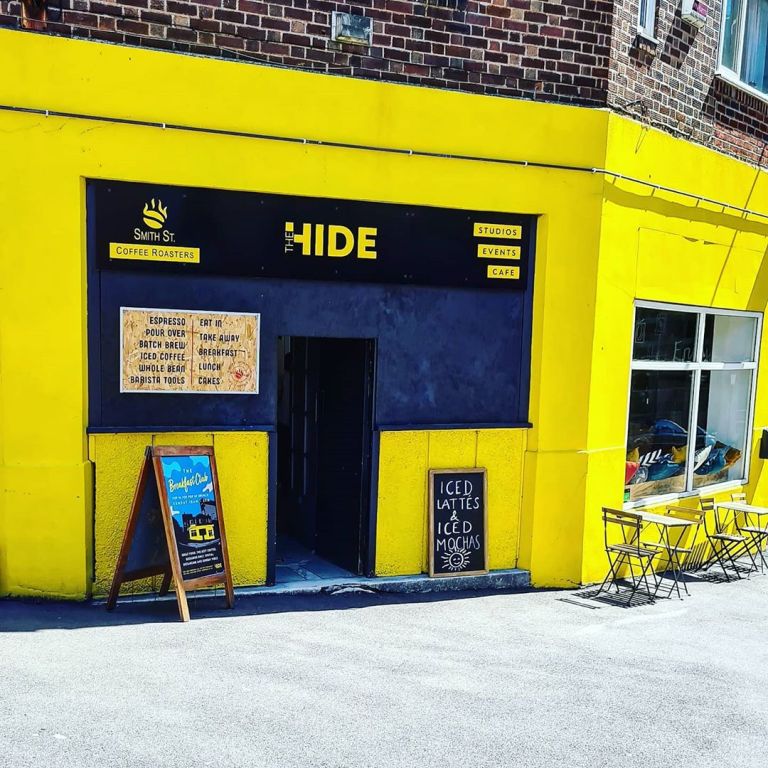 The menu had a global street food theme and we took absolutely ages to choose what to have, as it all sounded so delicious! In the end, we decided we’d go halves on the menemen and a breakfast flauta.

The menemen was a Greek/Turkish dish of oven baked green peppers, tomatoes, onions, garlic, chilli and parsley, topped with a fried egg and Beyaz Panir cheese. It was served with seeded Turkish bread, which I always find entirely irresistible. 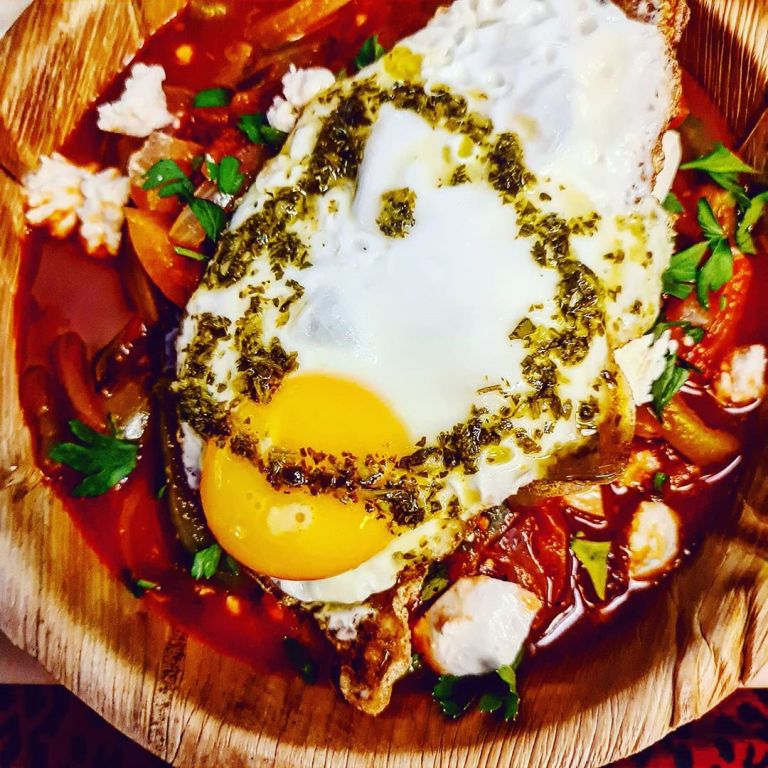 The Mexican flauta was a pan fried tortilla filled with a green omelette, Yorkshire cheddar, bacon and fried onions. Alongside this came some creamed sweetcorn, chilli & coriander dip and sautéed potatoes.

Both dishes were incredible, and not just because it’s the first breakfast we haven’t cooked for ourselves in months! Trudi and Justine, who own Percy and Lily’s, are so knowledgeable about their street food and always get the seasoning of their dishes spot on. As spicy food fans, we deliberately chose dishes that sounded like they’d have a good kick and they sure did!

The menu was really nice and inventive and offered loads of choices we’ve never had the opportunity to try before. And, obviously, with it currently being very difficult to travel to all these amazing places to eat the local cuisine, this was a great way to experience some new flavours and cuisines.

We were really grateful that Trudi & Justine were able to adapt the quesadillas on the menu to make one suitable for our very-nearly one-year-old. This was actually the first time we’ve ordered her her own dish while we’ve been out and it was so nice to see her enjoy her sautéed cinnamon apples & banana quesadilla! 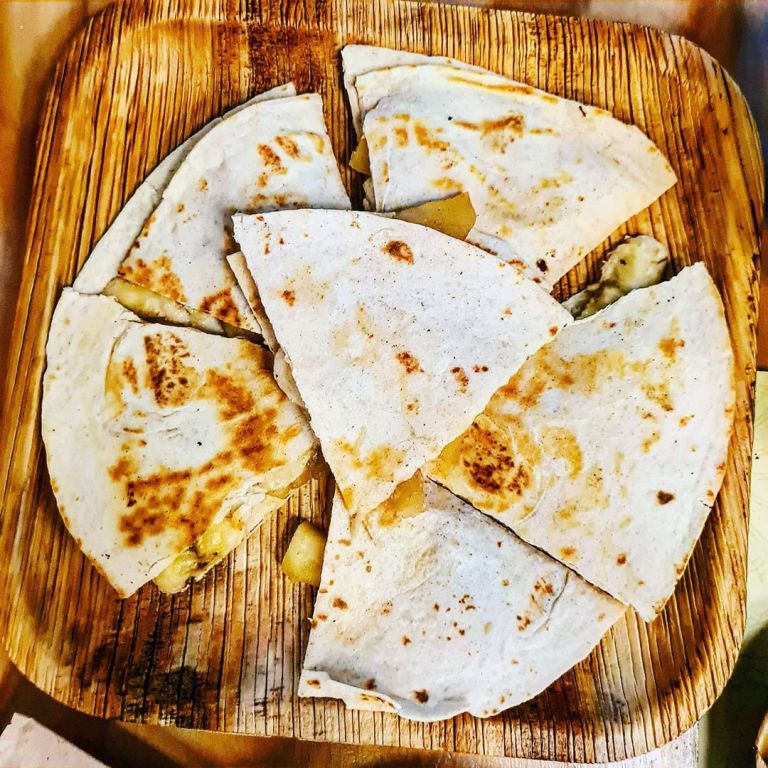 We felt really comfortable and reassured about the set up of The Breakfast Club being Covid-secure. Our details were taken beforehand for track & trace, we had an allocated time slot for arrival, all staff were wearing appropriate PPE, the menus were disposable, there were several antibacterial hand gel stations around. Plus, being a warehouse space, The Hide isn’t constrained by having a “usual” table layout and was able to set up tables really well-spaced out. They are also using a different exit to the building to where you come in. We felt really comfortable with the information we had beforehand and felt no qualms about the set up. It was such a lovely, normal family meal out, much-needed after so many months shut away!